Pack Your Bags For Jaisalmer – The Golden City

The Land Of Gods

Hello travellers, am back with a bang. This time my article is on Jaisalmer – The Golden City and I believe that Jaisalmer is one of the most beautiful places to visit in India. This city is a place in India which needs no introduction but for formality sake, I have to give an introduction.

Well, that’s a little intro about Jaisalmer – The Golden City. Now time for an all-out session on Jaisalmer. Brace yourselves there is a huge sandstorm coming your way!

Jaisalmer – The golden city was known as the camel route in the whole of Asia. This was the only route that connected India with Central Asia as it was the only physically and mentally feasible route unlike the Himalaya ranges. But all this changed once the British Era took over. As the Britishers came they brought in the method of Sea trade and it was soon enough that the camel route was forgotten and left alone by all travellers.

The city of Jaisalmer came to the limelight only during the 1965s, as this was the time when India was on war with Pakistan. During the war, Indian army desperately required some strategic points and that’s when Jaisalmer popped up. It was then decided that India could use it as an important place during the war.

This fort is actually one of the largest forts in the whole of Asia! In the year 2013, UNESCO declared the Jaisalmer fort as a World Heritage Site. The Jaisalmer fort provides cover to thousands of people. It also houses many residential areas, shops, cafeterias and oh yeah, Mysteries being one among them. The walls of this fort are golden in colour and all thanks to the sandstone used here. The fort also has many lookouts which used to serve the purpose of spotting an enemy from far off. But, nowadays these lookouts serve the purpose of acting as beautiful photography points for the tourists. These reasons boast as to why Jaisalmer – the golden city is known as the golden city.

The Jaisalmer fort’s centre is Dussehra Chowk which houses the Fort Palace. The fort Palace is an extraordinarily beautiful palace that is 11 storeys high. This palace is mainly famous for the things inside it as Rang Mahal which has beautiful paintings and moreover, this served as the bedroom of Mulraj II. The windows of this palace are created in such a way that they allow people from inside the palace get an uninterrupted view of outside while the vice-versa cannot take place. This palace also housed some beautiful sculptures and some stamps back from the era of Princely States. These reasons are enough to make this palace to feature in our article about Jaisalmer – the golden city.

Next up is the windy Patwa Ki Haveli. This Haveli is not just one, there are five of these which are all inter-connected. These Havelis were made for the five sons of an exceptional trader. These Havelis carry the same golden colour as the Jaisalmer Fort does, as they are made by using the same sandstone as the fort. But only four out of the five Havelis are open to the public as the fifth one is privately-owned. The Havelis have carvings that depict the history of Jaisalmer – the Golden City. The guides for these Havelis tend to take the tour in a rush which can spoil your fun. It is just an advise that you must take a trusty guide with yourselves who takes his time to let you observe the Havelis. 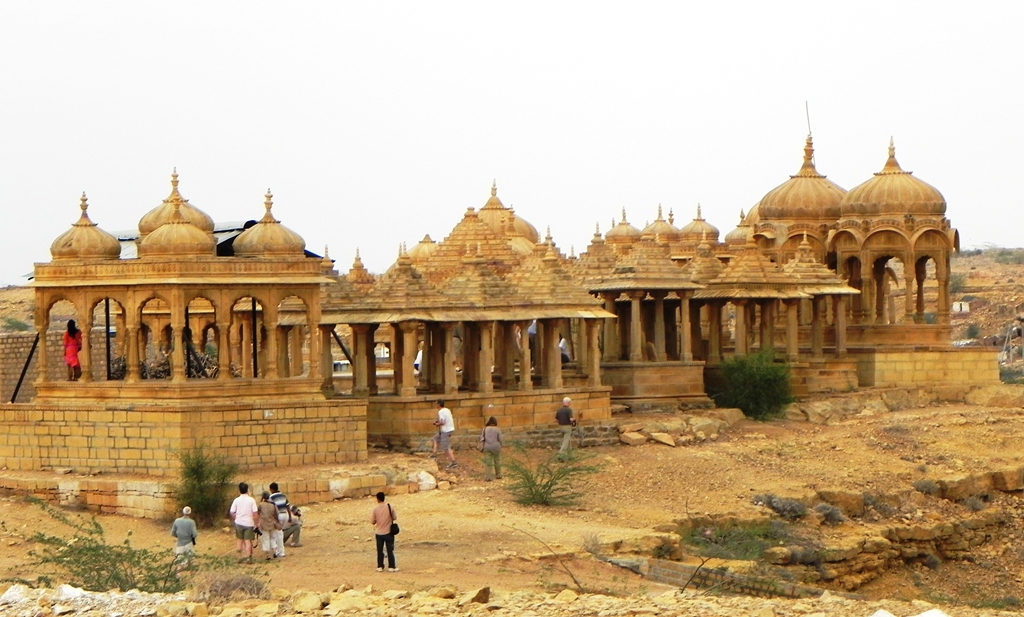 Next up is the peaceful and beautiful Gadisar Lake which is named after Gadsi Singh. This lake is actually an artificial reservoir. This lake acted as the only source of water for Jaisalmer – The Golden City until 1965, Can you believe that! The banks of this beautiful lake are covered by small shops and temples which tend to be beautiful. The best activity one can do here is to feed the catfishes in the lake or else watch the migratory birds that come here. This is an important place to visit in Jaisalmer – The Golden City. 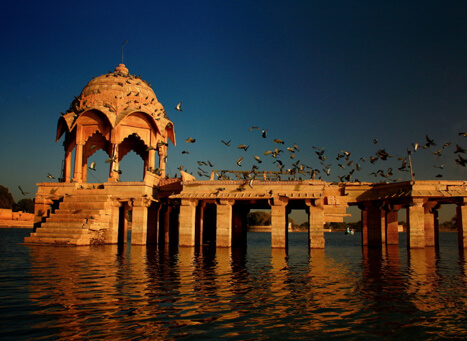 Finally, last but not the least place to visit in Jaisalmer – The Golden City and it is also not the last place to visit. Time for some Camels or the ships of the desert to enter into their roles. When one visits Rajasthan, they only wish to get a ride on the Camel and visit some really cool and ancient palaces, right? That’s why here is presenting you some Camel safaris. Other than Jaisalmer only two cities of Rajasthan provide this once-in-a-lifetime experience and they are Bikaner and Osian.

With the camel rides, you also get a package of resting out in the wild by sleeping in a tent in the deserts of Jaisalmer. You get a respite from the daily hassles and get to peace out under the moon and stars and let’s not forget camels too!

Well folks, it looks like that was all I had on Jaisalmer – The Golden City. If you feel I have missed something then do tell me about it in the comments section. But for now, that’s enough from my side.

Now then, what are you all sitting front of your screens for?, go on and book the tickets for Jaisalmer – The Golden City and have an experience of a lifetime. This experience to Jaisalmer will change you from inside for good reasons and will also make a better person out of you. Well for now good-bye everyone, I hope you all liked this article.